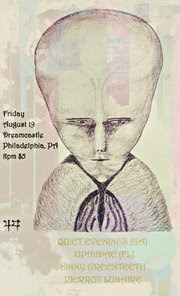 The night began with tape lust and ended with a bang (quite literally, had to hail a cab because there were gunshots echoing from the direction of our path heading out). The night was supposed to be capped by Quiet Evenings (aka Rachel & Grant Evans aka Hooker Vision), but they ended up being delayed and didn't get to play. No worries though, tapes were plenty and the ale was flowing.
Evidently we missed the rare opening set by Ginny Greenteeth, but we made up for it in live psych, vinyl, and a living room of instruments. c sides got his hands on the banjo and played a little ditty.
Tape recordings at bottom of page. Captured all that would fit on the tape, actually recorded over a Brahms cassette from the 80's. Flipped it over to the other side and the thing ripped. Got home- drunk, cracked the thing open with knife and fixed it back up.
You may have heard Pierrot Lunaire's recent tape Turn Back The Hands of Time on Hooker Vision, which from what i understand is a bit of a cult relic at this point. For the most part shedding the magnetic tape skin of the album for the show, Pierrot ripped through a set of dynamic skronk antics on two saxes, fed through two delay boxes and  a couple other units. Reminiscent of John Zorn on a nice dosed gin. The encore was a bit closer to the album, he sang through the sax mic over an old mellotron ditty, hit the spot just right and left me wanting more.
Going back down into the dungeon there was a vibe of deep peace in the air, and bright colored visuals on the walls that were so crazy looking you couldn't even tell what they were. It was neat finally seeing Xiphiidae live; I had to tell him later about the time that one of his noise records woke me up from a nap. Using recordings of his own design, he set up his own intricate, heavy duty soundscape installation. Was like being lost in an aquarium for a while.
Also found out that Xiphiidae is the scientist's name for swordfish, fitting title for this Florida dream carver. He has a slew of tapes out, check them out on Housecraft and Rotifer!
Pierrot Lunaire at Dreamcastle
c sides [acoustic twang] at Dreamcastle
Xiphiidae at Dreamcastle
Posted by Wildechosystems at 3:48 AM

Wildechosystems
Pine Barrens, NJ
Rural satellite radio from the tallest trees in the Pines. If you are musician/artist/band and you see your works represented here and would like them removed, don't hesitate to email or comment- eonphader @ hotmail. Entries will be promptly removed upon request. Contrary wise, feel free to email if you have something you would like me to check out! The REAL Jersey Shore